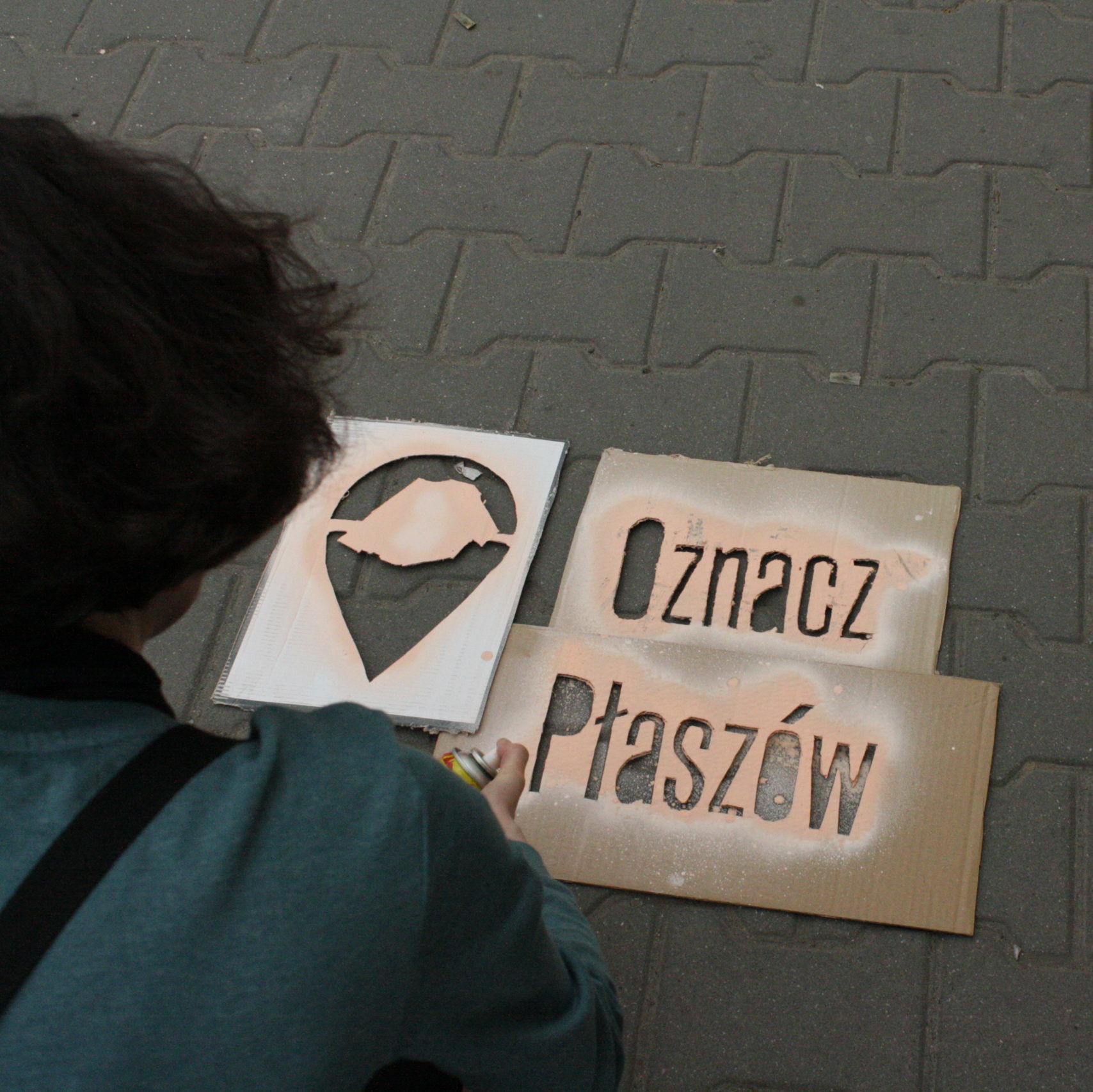 Currently the area of former KL Plaszow camp disappeared from the map of Krakow, though not in any literal meaning. This site is still a green and wild sanctuary, a breach in urbanized area and might be perceived as a geographical wound.

As the Curatorial Collective, a group of affiliated young scholars, we decided to research on this subject as a part of difficult jewish heritage in Kraków.

While asking about the functions of Plaszow, we presented three time dimentions of the site: the past, the present and the possible future. In collaboration with artists and instituions (such as the Historical Museum of the City of Krakow, Municipal Greenery Management Board in Krakow and the Department of Culture and National Heritage at Krakow City Hall), we managed to organise a bunch of actions in April 2016, connected to annual event „Remeber with us” created by Historical Museum of Cracow.

We wanted to ask and visualise in public the question “Where is the camp?”. This became a core question of the project, the aim of which was to open a debate about this site and its place in the collective memory of Krakow’s inhabitants. We asked them to „Mark Plaszow” – to point the place and make it visible.

To conduct an art-based research, we used several methods and planned phases of the action. Aa a young scholars with humanistic academic background, we started with 1) research, assessing level of knowledge and awarness of Kraków’s inhabitants. Then we move to 2) observation, allowing us to assess the social practices on the camp site. The crucial phase was an 3) artistic intervention – provoking debate, initiating learning process: MARKING THE CAMP. Last, but not least, we used also social media, what helped us prolonging the action, deepening and preserving the change.

Parts of the project

We conducted a survey among the inhabitants of Cracow and visitors, directly in the area of the former camp and the ghetto. Conversations were carried out in a form of performance, because the interviewer asked for directions to reach the site of the former camp, in a manner typical for tourists.

The survey proposed questions were both closed, on nominative scale (yes/no), like:
– do you come from cracow?
– do you know the location of the former concentration camp in the town?
– do you know how to get there?
As well as open: what should be done with this area in the future?

Memory triggers in conversations with passers-by were post cards, divided into two parts showing at once contemporary view on Plaszow and the archival photos of KL Plaszow taken in 1943-1944 that came from the collection of the National Institute of Remembrance in Krakow. We handed out cards as a souvenir to remind about the traumatic past of this green area.

The next action was an exhibition in public space on Ghetto Heroes Square, popular tourist place. It confronted the abverse: open air practices of today’s usage, with the reverse: historical meanings of this places. American artist Jason Francisco made photographs of Plaszow within a time period from 2010 until 2015, observing the users of this place. He interviewed many people to realise how complex is the social awareness of the camp existence.

The exhibiton was followed by a multimedia installation in a small qube space, which combined the photos of people “misusing” the area with recorded fragments of authentic interviews with passers-by met at the former Plaszow camp.

As a more permanent visual intervention in public sphere we created a mural on walls of overpass on the border of Plaszow camp site. Right near the stop of a bus taking clients of the shopping mall back to the city center.

The mural designed by a local artist Artur Wabik was to reminisce about this place by re-entering it into the map of Krakow. The monument from 60s and limestone furnaces – symbolic for the Quarry of Lebanon; are two points that help to associate the character of a place with their geographical location. We asked “Where is the camp?” by giving the exact location of the GPS in the mural, inviting everyone to search for it, like in a city game.

Unfortunately, we realised only two parts of the project, without pointing the big question directly. The city authorieties was afraid that focus on concentration camp will firstly: disrupt positive connotations of Krakow as Jewish heritage site among the international audience, and secondly: reveals it’s misuse and have negative result for Kraków’s international image.

Mapping the site and projecting the future, we also presented commemoration projects designed by students of the Edinburgh School of Architecture and Landscape Architecture.

Since 2013 more than a hundred young landscape architects made the effort to map the area and design new meaning to the sites: paths,quarries, woods and fields. The projects aim to activate the memory of the site within the present day urban green space.

A selection of their imaginative, inspiring works was shown in an open – air gallery surrounding the Krak’s Mound.

Last but not least, we provided a website and social media profiles to stay connected with the audience and at the same time prolonging the action, consolidating results, building arena for cooperation with institutions, individuals, krakow’s community.

We invited through social media and mailing list Krakow’s inhabitants, opinion-leaders, and researchers to build a network of people who care for Plaszow.

After our project, Plaszow is being taken care by one of the institutions we cooperated with, Historical Museum of the City of Krakow.

On January 26, 2017 the Kraków Municipality, the Jewish Religious Community in Kraków and the Historical Museum of the City of Kraków signed a joint agreement which is the cornerstone of the future commemoration of KL Plaszow. It is now called a memorial site and is protected as a national heritage.

You can read more on this declaration and further fate of the place here.